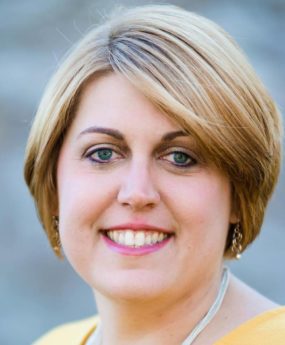 Kristen Weller was introduced to real estate as a toddler – literally! Kristen’s dad became a real estate professional when she was just four years old and the world of real estate quickly became her very familiar place. In those days, Kristen would occasionally find herself at an open house, riding along to a showing, or traveling along to real estate sales conventions. When she was in just 4th grade, she was already helping her father create the Herb & Doaty Real Estate Guide and she twice made the cover!

Real estate was the family business, and it still is today. In 2019, Kristen made the decision to establish her own independent real estate brokerage. Along with some insight from her father, Randal Doaty, she opened the doors of Legacy Real Estate Associates, LLC. Kristen had previously worked in youth ministry but felt a desire to follow in her father’s footsteps. Weller, along with her dad and Rob Landis, launched her very own company at precisely the same age her father had done so many years ago.

Kristen quickly amassed a strong client base when she entered the real estate field. The opportunity to work with Rob Landis and her father, both seasoned real estate sales professionals, was instrumental to her success. However, her own familiarity and expertise with social media and every imaginable technological gadget brought a new dimension to complement her sales mentors. This blend of sales expertise and emerging technology quickly helped to boost Kristen’s home sales volume.

It was an honor for Randal Doaty to watch his daughter succeed in real estate sales, but little was he prepared for his daughter’s desire to build a company of her own, just as he had done. When Kristen announced her intentions to open Legacy Real Estate, it begged one question. Great idea – what’s your plan? The real estate model she described was unlike most of the competition in the marketplace. It was outside the box. It was groundbreaking. It was innovative and just like a Doaty mind would imagine.

Kristen Weller has spent her entire life preparing for a career in real estate, and most recently, to launch an innovative real estate business model which is sure to turn heads. With her solid real estate sales experience, the backing of seasoned real estate professionals and the help of the like-minded sales staff she has been attracting, she is sure to find success. Through it all, she intends to continue to sell real estate and provide the highest level of service – like her dad has done for the past three decades.

"Working with the team at Legacy Real Estate Associates has been a great experience for us.  We used them to sell a rental unit.  The sale took... continued"
- Randy & Marilyn Moses
View All